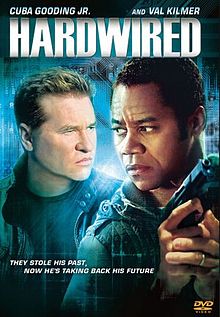 In the not too distant future where corporations control nearly every aspect of human life, a man named Luke (Cuba Gooding, Jr.) is involved in a car accident that claims the life of his wife and their unborn child. Luke has severe brain damage, but Hope Corporation agrees to implant a chip into his brain to save his life. He discovers that this chip also constantly sends advertisements until either the person obtains the product, or they go insane. While trying to figure out why they did this to him and who he is, he finds out that the chip is a test product with a fail-safe that could kill him. He succumbs to the effects but the Corporation fears that their test might be discovered, and they decide to activate the fail-safe. Just before it goes off, a group of underground hackers led by Hal (Ironside) and "Keyboard" (Chad Krowchuk) hack into the chip and save his life. After using the chip to guide him away from Hope Corp. pursuers, they agree to try to help him remember who he is in exchange for assisting in their fight against Hope Corp. They show him that his accident was no accident but actually planned by Hope Corp. so they could use him as a test subject. He agrees to help but is captured during the attempt and taken to a facility controlled by Hope Corp. Luke, with the help of Punk Red (Tatiana Maslany) and Punk Blue (Juan Riedinger), manages to fight his way to the leader of the project, Virgil (Kilmer). Virgil is killed after a short confrontation, and Luke escapes. He meets up with "Red" and "Blue" (the only remaining members of the underground group). Together they vow to continue the fight until Hope Corporation is destroyed.