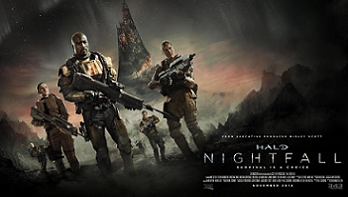 Survival is a choice.
Advertisement:

Halo: Nightfall is a 2015 five-part film set in the Halo universe. It stars Jameson Locke (Mike Colter), the co-star of Halo 5: Guardians.

In the aftermath of the Human-Covenant war, with a very tentative peace between the two factions, Office of Naval Intelligence agent Jameson Locke and his team track some rogue Covenant activity to the colony planet Sedra. There, a Sangheili (Elite) activates a mystery item in the middle of a populated area, unleashing a bioagent that only targets humans. In retrieving the shipping origin, Locke's team learn that the key element in the bioagent is being harvested from a fragment of the Halo ring Master Chief destroyed in Halo: Combat Evolved, which has taken up a close orbit to a nearby red giant.

Because of treaty agreements, the UNSC cannot officially go to the fragment, but nevertheless, Locke and his team join with a squad from the Sedran Colonial Guard to investigate the activity on there. The thing is, the fast rotation of the ring gives it a day-night cycle of only 16 hours, and temperatures will rise up to 900 degrees during the day. So the mission is to get in, capture the smugglers, destroy the deposit, then get out before everyone fries. In the words of the Arbiter in Halo 3, "Were it so easy."