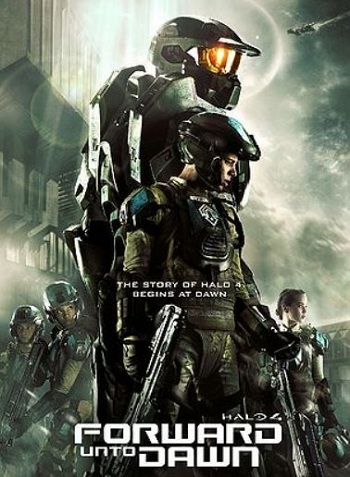 The Story of Halo 4 Begins at Dawn.
"Axios!note I am worthy."
Advertisement:

Halo 4: Forward Unto Dawn is a live action prequel to Halo 4, canon to the Halo universe, that tells the origin of Commander Thomas Lasky, the executive officer of the very ship (the UNSC Infinity) that rediscovers Master Chief John-117 during the events of Halo 4. Taking place thirty-one years prior to Halo 4 in the year 2526, Lasky is a freshman cadet in Hastati Squad at the Corbulo Academy of Military Science on colony world Circinius IV. He is struggling to live up to the reputations of his mother and brother, while having no particular love for the way the United Nations Space Command is handling the Insurrection. Most of his fellow cadets look down upon him due to his sympathetic views to the Insurrection, although he finds friendship with fellow cadet Chyler Silva.

When the Covenant attack Corbulo Academy, Lasky's life is forever changed, as he is thrust into a new war that no one at Corbulo is equipped to deal with, with Hastati struggling to merely survive against their unknown enemy. However, Lasky also witnesses the Master Chief's heroics during the battle, which may just help him to find his own resolve to fight...

The series was released on YouTube in five separate parts from October 5 - November 2, 2012. Six short promotional pieces that expanded on the background of the characters and universe were released in the weeks leading up to the premiere. An extended cut was included with the Limited Edition of Halo 4, which was later released on DVD and Blu-ray on December 4, 2012 (with a Deluxe Edition released on May 27, 2013).