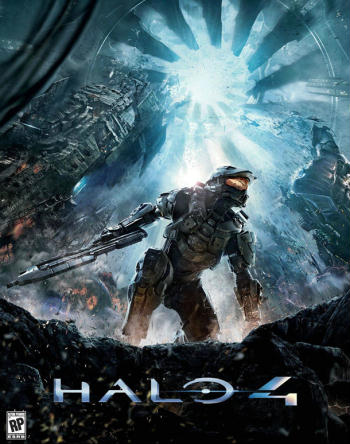 Taking place four years after Covenant/Flood conflict, the Master Chief and his AI companion Cortana have been left adrift through space in the partially destroyed frigate Forward Unto Dawn. Having placed himself into hibernation, Chief is woken up by Cortana as they come upon an artificial Forerunner planet called Requiem, in which they and a Covenant remnant are then pulled inside.

After crashing landing inside the planet, the two soon discover that they have a more pressing matter on their hands: Cortana reveals that she's in the stages of Rampancy, a condition in which A.I.s that are in service for longer than they're intented to start to deteriorate. But if they can get back home, there's a chance that her condition can be cured.

As they try to find their bearings and reestablish contact with the UNSC, Chief and Cortana learn more about the Forerunners and meet new allies along the way. But in the midst of dealing with their new friends and foes, Chief's true test is whether or not he can race back home and save Cortana, before it's too late.

While the gameplay for both campaign and multiplayer have gotten an overhaul, the developers consider it to be an natural evolution of the series rather than a full revamp. It takes cues from both the classic trilogy and the changes made in Halo: Reach. Armor Abilities return with both old favorites and some new selections, including Promethean Vision, extended energy shields and deployable turrets. Health packs are removed once more and you can only wield one weapon at a time. For the first time in the series, sprinting is an automatically equipped function (in Reach it was an optional Armor Ability). The player also now has an entirely new selection of weapons to choose from that are Forerunner in origin.

In the multiplayer titled "War Games," etailed armor permutations, customized load-outs, and weapon skins are available as you level up your character, and as you gain points in battle you can call in ordinance that gives you more powerful weapons and other upgrades to aid you. Your loadouts are also split between several factors: Primary Weapon, Sidearm, Grenade, Armor Ability, Tactical Package, and Support Upgrade. Most have precedent in previous games, with the exception of Tactical Package and Support Upgrade, which are passive boosts to your character that can give them an edge in certain deployments including: spawning with additional grenades, less points needed for ordinance drops, increasing shield recharge rate, improving vehicle operations (including ejection from vehicle if destroyed), and even gaining more experience per game.

The game has a Spin-Off live-action series called Halo 4: Forward Unto Dawn, which features a group of naval officers-in-training as their school is attacked by the Covenant in the early days of the Covenant war... until the Chief shows up. The first episode was released on October 5th, 2012, with the next four parts released over the following four weeks.

In addition, the story of the campaign is expanded upon through Spartan Ops, a co-op campaign which effectively replaces the Firefight mode of ODST and Reach. Its storyline, which takes place six months after the single player campaign, has the players assume the role of the Spartan-IVs of Fireteam Crimson as they fight for Requiem's key locations. Spartan Ops was designed to be expanded upon throughout the game's lifespan, with more stories and chapters that would have bridged the gap to Halo 5: Guardians; however, it only lasted one season before being cancelled, with its story being continued in Halo: Escalation instead.