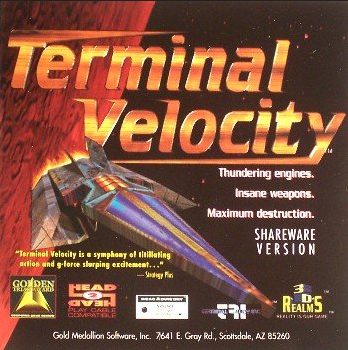 Terminal Velocity is a video game developed by Terminal Reality and published by 3D Realms, released on May 1, 1995. It is an arcade-style flight combat game, with simpler game controls and physics than flight simulators. It is known for its fast, high-energy action sequences, compared to flight simulators of the time.
Advertisement:

Terminal Reality also developed a similar game, Fury³, published that same year by Microsoft. It used the same game engine (Photex + Terrain Engine 1) and basic game mechanics, but was designed to run natively on the new Windows 95 operating system. Though considered to add little to the gameplay of Terminal Velocity, Fury 3 spawned an add-on pack, F!Zone, as well as a sequel, Hellbender.

The story is set in the year 2704, when the ASFAR (Alliance of Space-Faring Alien Races), of which Earth is a member, suddenly turns against Earth and their fleet ravages the planet, starting a war. The player flies a powerful starfighter, the TV-202, in a series of missions to defeat the enemy. In Episode 3, the player learns that a huge supercomputer known as X.I. (Xenocidic Initiative), located on Proxima Seven, is responsible for the war. Their final mission is to eliminate it.

Not to be confused for that last level in Sonic Colors or the 1994 movie of the same name.