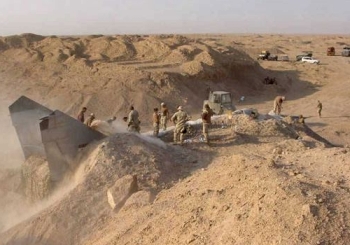 Excavating some Ancient Persian MiGs.
"No artificer or wizard can replicate the powerful artifacts found in Xen'drik. These objects wait to be found, and with international tensions already heightened by the Last War, possession of deadly magic weapons could easily shift the balance of power."
— Eberron, "Eberron Campaign Setting, Chapter 7: Life in the World"
Advertisement:

In fiction there's often a lot of reasons why opposing factions want to develop better technology (although they only need one). While some research and create it, others just find (or supplement their own creations with) Lost Technology. When both sides scramble to secure such caches you end up with this trope.

Where the technology's being salvaged from can vary greatly depending on the setting and story;

The list goes on, all that matters is that both sides are struggling to get their hands on technology which they didn't develop (or build, in extreme cases) themselves. If they're merely finding the means to build their weapons (or also actively reverse engineering the technology) then it's also a Lensman Arms Race. If this is the only means of getting hold of anything then the setting is most likely a Scavenger World.

When this happens with characters rather than technology, see Sealed Cast in a Multipack. When they use technology which is technically obsolete (and often already theirs) it's Break Out the Museum Piece. When everyone's after a specific piece of technology it's a MacGuffin or Sword of Plot Advancement. If the source of the technology engineered the conflict for their own ends it's War for Fun and Profit. Compare; Gotta Catch 'Em All, Grand Theft Prototype. Particularly old technology must have had Ragnarök Proofing and benefits from Older Is Better.