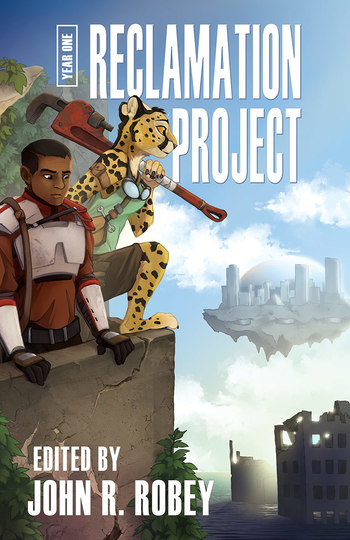 A new world, built atop the bones of the old one.

“The humans were amazing, in their day. Our world is layered over theirs, and the bones of the old one still poke through. On a clear morning you can see what’s left of one of their cities out in the bay… Huge buildings, tens or hundreds of stories high, standing precarious and mostly-uninhabitable, their flooded streets under twenty feet of water. But the humans’ day has passed. Oh, there’s still a few of them out there, trying to take back the world they squandered. But without claws? Without fur? Without scent? Heh. Good luck to ‘em.”

creator of The Suburban Jungle, and published by Furplanet

revolves around the city of Ambara Down, a former flying city that crashed to the ground forty-five years ago, and is now occupied by scavengers and opportunists, looking to dig up the city's secrets, while the human led Reclamation Project tries to exploit the furry population and regain control of the ground.