Recap / Star Trek: The Next Generation S6E18 "The Chase" 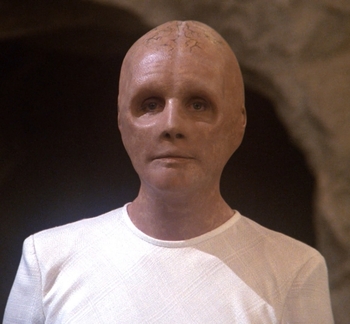 "What is this 'Founder' that you speak of?"
Advertisement:

The Enterprise is on a routine science mission, studying protostars in the Volterra Nebula, when Picard receives a puzzling invitation to the observation lounge from Riker. Entering to see a statuette highlighted on the table, Riker brings the lights up to reveal a guest, Professor Galen, Picard's old mentor from his days as a xenoarchaeology student. The captain is overjoyed at this surprise visit. After they exchange heartfelt greetings, he eagerly resumes the role of pupil as Galen quizzes him on the Kurlan naiskos, a gift from his recent explorations, sitting on the table. Picard gushes over the extraordinarily rare find.

The conversation turns serious as Galen teases Picard about some new research he has been doing over the past decade, an impending discovery that he claims will shake the galactic community to its core. But he won't say any more unless Picard agrees to accompany him on his archeological adventure. It would mean giving up his command, however, and Picard can't bring himself to do that, no matter how tempting the adventure. The professor is personally affronted at being refused — again — by his favorite student, throwing back several cutting invectives before storming back to his shuttle.

Some days later, the Enterprise receives a distress call from Galen's shuttle, which has been boarded by a hostile Yridian ship. Picard orders it disabled, but the Enterprise's phaser blast destroys it completely. Galen, mortally wounded by a disruptor, is beamed to sickbay. He only manages to say "I was too harsh," before dying.

With both Galen and his attackers dead, the crew have only the shuttle's computers to shed light on what happened. What little data they can retrieve, a series of numbers, is presumably part of Galen's mysterious research and what the Yridians were after, but means nothing to them without further context. A new clue emerges at Galen's intended destination, Indri VIII, which has just been scoured of all life. With the presumption that Galen's research is biological in nature, the computer identifies the data as an assortment of ancient DNA fragments from across the quadrant. Such disparate fragments should have no relation to each other, but Crusher notes that they have similar protein configurations. They connect to form an algorithm that could only have been deliberately engineered four billion years ago.

They must find the missing fragments to discover the purpose of the program. It seems they are out of leads, until Picard remembers that Galen acquired his naiskos from the Kurlan system. The only life-bearing planet there, Loren III, is not among the DNA fragments, possibly stolen by the Yridians.

The Enterprise arrives to find not one, but two interested parties: the Cardassians and the Klingons, neither of whom are interested in sharing what they are convinced will be some cool ancient technology. Picard convinces the captains, Gul Ocett and Captain Nu'Daq, to see reason. If they don't cooperate, no one will find all the pieces. As luck would have it, there is only one piece missing between the three of them, so they have the computer search for it by analyzing the existing fragments for a pattern.

As soon as it spits out the result, Gul Ocett turns on them. She retreats to her ships, disables her erstwhile allies, and takes off towards Rahm-Izad.

Which is the wrong system. Ocett apparently made a botched attempt to subvert the Enterprise's defenses, so Picard and Nu'Daq were prepared for her betrayal and decided to turn the tables by giving her a false lead. Nu'Daq's ship was still damaged during the ruse, so he is forced to remain on the Enterprise.

Their real destination is the Vilmoran system, where they find one planet with trace amounts of organic lichen that promises to be the final piece. On the surface, the crew (plus Nu'Daq) are soon joined by a very annoyed Gul Ocett... and a party of Romulans, whose cloaked ship has been tailing them from the start. A Mexican Standoff ensues. While everyone is busy bickering over who gets the prize, Picard and Crusher surreptitiously scrape some fossilized residue into a container. Their tricorder puts the last piece into place, and then...

A recording plays of a member of the billions-old race that created the puzzle. She gives a heartfelt (and somewhat ironic) speech congratulating them for coming together in a spirit of friendship to find their secret message, explaining how the various humanoids across the quadrant were seeded by them eons ago. The audience, apart from Starfleet, is clearly not pleased by their reward and go right back to insulting each other as they leave.

It is a bittersweet conclusion for Picard. The discovery his friend had sacrificed so much for, including his life, has fallen on deaf ears. That is, until he receives a message from the Romulan commander, who says something rather unexpected in parting.

Romulan: It would seem that we are not completely dissimilar after all. In our hopes, or in our fears.
Picard: Yes.
Romulan: Well then, perhaps... one day.
Picard: One day.