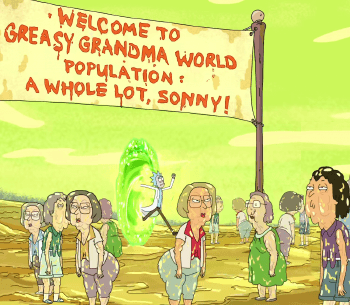 "Ever since Tai-tastigon was built back in the days of the Old Empire, folks in these parts have loved puzzles. Once their whole culture was built on them, social conventions and all, and the highest form of art was the labyrinth."
— Tubain, Chronicles of the Kencyrath
Advertisement:

On their Wagon Train to the Stars, our intrepid heroes come across a planet whose inhabitants all share a single defining characteristic. Everybody is a robot, or a gangster, or a Proud Warrior Race Guy, or an over-the-top actor, or has the same name, or wears a Nice Hat. To some degree, this is unavoidable; you only have so much screen time or page space to develop and explore a culture. This is especially true in episodic series where the heroes travel to a new planet each week and you have to both introduce a planet and tell a story all within a single episode. If planets are revisited, it also provides an easy way for viewers to keep track of which planet is which and remember where the story is set.

A Planet of Hats is a convenient way to make it so that the viewer's brain doesn't explode, but planet-wide monocultures seem a tad unlikely based off the best-known planet for Earthlings. Just for comparison, within the 29% of Earth's surface that's solid land, our planet hosts just under two hundred sovereign states, with an estimated 5,000 ethnicities and 7,000 living languages. There is no reason to suspect that alien life forms would be any different, but in media they are nowhere near as diverse as one might expect. If anything, aliens tend to be surprised by the amount of diversity among humans.

Earth itself is sometimes portrayed as a Planet of Hats.note And anthropologists have discovered many universal human traits

that could plausibly fit the bill... though many are universal enough that it's difficult to imagine a society without them. Defining human characteristics have included "pluck", "sheer cussedness", creativity, and sometimes even "diversity", though "evil" and "stupidity" are more misanthropic answers to the question. Sometimes it's stated that Hattery is the natural state and it's humans that are aberrant, or rather that humanity's Hat is not having one.

Writers love to use the hat planet to represent controversial issues in society whenever they can. This way the show's characters can take a thinly disguised public stand on an issue that the network execs would otherwise consider too taboo to openly discuss. We can't have our heroes discussing euthanasia, but should they stumble across a Planet of Hats where everyone who gets sick is put to death, then it's okay. Eventually the plots will run out with an entire race of identical people so one or more of the species will have their hat fall off, declaring My Species Doth Protest Too Much. Alternately, the show may explore why Klingon Scientists Get No Respect. For maximum typing, the characters can also be physically uniform, as in People of Hair Color.

The Planet of Hats may also be an unintended result of a Character Exaggeration type Plot Tumor applied to an entire race, when the audience had previously only seen a single representative who the writers now wish to market. For cases where a planetary hat is extrapolated retroactively from a single character, see Planet of Copyhats.

Occasionally justified in settings with relatively convenient transportation methods. On Earth, humanity developed separate cultures while scattered across the continents in an era when few people travelled. The absence of cheap and fast transportation and communication caused populations to exchange little information with each other until they had already developed persistent cultural differences. If a like-minded group of space colonists settled an uninhabited planet, they could attempt to preserve cultural unity with the aid of mass communication, trade, and travel from day one. Less happily, a non-spacefaring planet controlled by a world-conquering empire set on centralization could perhaps also impose such a worldwide monoculture, even if the planet once had many cultures. In even more mobile settings, populations might naturally tend to "sort" themselves by moving to like-minded worlds.

Compare: Gang of Hats. Contrast: Multicultural Alien Planet. See also Rubber-Forehead Aliens, Intelligent Gerbil, Scary Dogmatic Aliens, Tribe of Priests. May result because or into Apathy Killed the Cat. If the planet's hat is being evil, it's an example of Always Chaotic Evil. Serious Business is what happens when the show's setting gets a hat. This trope in itself is a good example of Sci-Fi Writers Have No Sense of Scale. See Single-Biome Planet when the planet is unnaturally uniform physically. One-Product Planet is a subtrope, but focuses on economics rather than culture.

For the webcomic of the same name, see here.

Killgarians are apparently made up of over-the-top manly men who kill over the slightest thing. Considering Killgar is the only one left, it is likely they all killed each other.

Killgarians are apparently made up of over-the-top manly men who kill over the slightest thing. Considering Killgar is the only one left, it is likely they all killed each other.