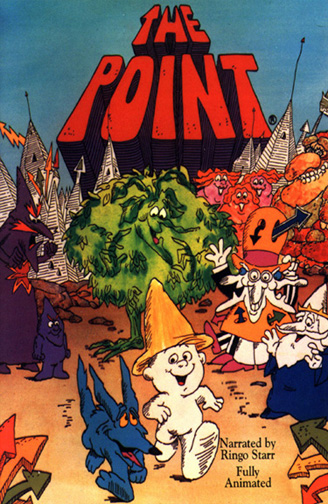 A 1971 more-or-less independent animated musical featuring songs from Harry Nilsson and many Disney Acid Sequences note This is likely due to Nilsson having come up with the concept on a walk through the woods while he was tripping on acid with animation by Jimmy Murakimi and Fred Wolf. It acts as a companion film to an album by Nilsson of the same name.

This story is framed as a father (voiced by Dustin Hoffman in the initial broadcast) reading a story to his son.

We begin in The Land of Point, where the "law of the land" states that "everyone and everything must have a point." This is carried out to its logical extreme—buildings, animals, plants, and people are all "pointed" to the point that nothing in the entire town is round. Except our protagonist, Oblio, who was born round-headed. He copes by wearing a pointed cap, and he has help from his dog and best friend, Arrow. (Yes, Arrow is very pointy, especially in the muzzle.) He is generally tolerated by everyone in town, some Fantastic Racism abounds, but he is well liked by the other children and the good-hearted but naive King.

One day, he beats the son of the evil Count at a game of Triangle Toss, the town's equivalent of football. The Count, who intends to have his equally evil son rule the village one day, sees Oblio's popularity as a threat and makes up his mind to get rid of him. He uses the law of the land against Oblio, and the King has no choice but to exile him and Arrow to the Pointless Forest—which, strangely enough, is full of pointed trees. In the Pointless Forest, he meets the Pointed Man, who points in every direction (you see, "A point in every direction is the same as no point at all.") and seems to exist solely to convince Oblio that the forest and all of his experiences therein are pointless. Oblio also meets and sees other wonders, all of which lead him to understand that, as the Rock Man puts it, "You don't have to have a point to have a point. Dig?" Oblio completes his hero's journey, returns to the village, and teaches everyone the main Aesop: "Everything has a point, whether it shows or not."

The movie is interspersed with songs, nearly all of which have little or nothing to do with the actual plot other than a line or two. This is totally excusable, since the songs and the movie are both Moments of Awesome in the composer's body of work.

Pointed Examples (or pointless examples, depending on your point of view):