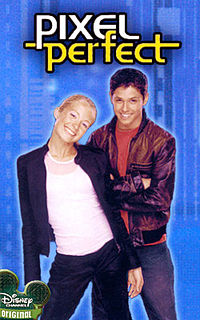 Pixel Perfect is a Disney Channel Original Movie, released in both the United States and United Kingdom in 2004. It stars Ricky Ullman as Roscoe, Leah Pipes as Sam(antha), Spencer Redford as Loretta Modern, Porsha Coleman as Rachel, and Tania Gunadi as Cindy.
Advertisement:

The story starts with Sam, Rachel and Cindy's band, the Zettabytes, auditioning for a gig at the Earsplitter. Halfway through their song, the guy in charge calls out lead vocalist Sam for just standing there while she sings, when she should be dancing to the music. She tries, but it's less than pretty and they all know it. note Cue the Moist Towelettes taking stage right after, who he seems to have no problem watching dance.

Fully aware of his friends' need for a new member, Roscoe gets a bright idea. Having already created a holographic cat using his father's technology, he says "Sure, why not?" and sets to work making a holographic human by compositing data from CDs, magazines, and pictures of Sam.

Flash forward to the next day, where the Zettabytes are trying to find their new singer/dancer, with hilarious results. After they've exhausted their list, Loretta waltzes in, asks them to play a song, and proceeds to demonstrate a gymnastics routine while singing. Stunned and amazed, the girls agree that she's perfect for the job. And then Sam trips through her and they learn about the whole hologram thing.

It's less Anvilicious and Narmy than you might expect from a DCOM, and actually rather enjoyable. For a time, it was hardly ever on the air, and when it was, it was at about 2 AM. However, it has since become available on DVD and Disney+.