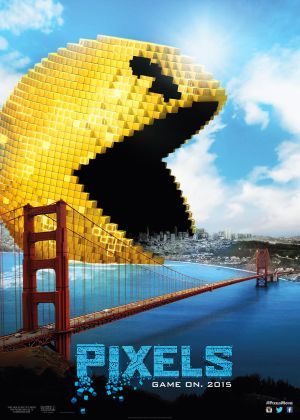 Play For the Planet.
Advertisement:

Pixels is a 2015 Science Fiction action/comedy film starring Adam Sandler, Kevin James, Peter Dinklage, and Josh Gad, directed by Chris Columbus and based on the 2010 short film of the same name by Patrick Jean. Much like the original short, the film incorporates dozens of licensed video game characters from the 1980s, including Donkey Kong, Pac-Man, Centipede, Q*bert, Tetris and Space Invaders.

In 1982, NASA launches a time capsule into outer space in the hope of making peaceful First Contact with alien life. Included in the capsule is a representative cross-section of Earthly delights from the day, including a number of classic arcade games. Unfortunately, the aliens interpret the arcade games as a declaration of war, and decide to attack us back first, using various video game characters as models for their assault and hell-bent on turning Earth into a mass of giant pixelsnote Technically speaking, they're voxels

, but let's just go with "pixels". US President William Cooper (James) calls on his buddy, former arcade champion Sam Brenner (Sandler), Sam's childhood nemesis Eddie Plant (Dinklage) and nerdy, anti-social conspiracy theorist Ludlow Lamonsoff (Gad) for help. Brenner must now use his assembled team to defeat the alien invasion using the power of video game logic before the planet is reduced to nothing but pixels.

The short film can be found here

, and the first trailer can be found here