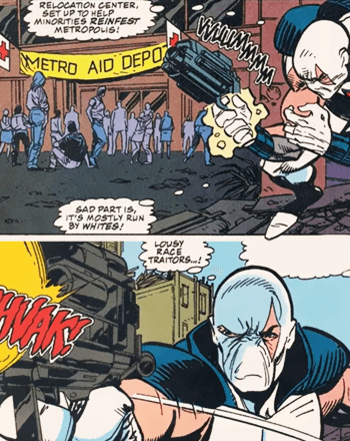 "Blood-traitor is next to Mudblood in my book."
— Bellatrix Lestrange, Harry Potter and the Deathly Hallows
Advertisement:

Bob belongs to a certain group, or at least Alice considers him to belong to it, and thus she demands that he stay "loyal" to this group. It's beside the point whether or not the group actually exists as a relevant group and whether Bob actually sympathizes with it or not.

Consequently, Alice will consider Bob a "traitor" or similar whenever he does something she considers to be against the group. This also includes anything that might be beneficial to any other group, based on the assumption that helping others is the same as damaging the group. She gets to decide what's good for the category, and she assumes any disagreement comes from treachery. Note that words such as "traitor" or "betrayer" do not necessarily have to be invoked, as long as Alice makes her position clear one way or another.

This group can be exactly anything. In real life, psychological experiments have shown that people can quickly be made to develop group identity over any dividing lines, no matter how arbitrary and superficial. However, some dividers are more common than others. The classics are race, gender, class, religion, and what sports team you're cheering for. "Uncle Tom" is a common mainstream term for people who are perceived as betraying their own group in order to gain the favor of an outside, usually more powerful, group.

Branding someone a Category Traitor is usually Serious Business... at least for the character who does it, even if the narrative doesn't agree — the accuser can be portrayed as justified or at least as a good kind of bigot, but can also be portrayed as a Straw Character or someone doing Activist Fundamentalist Antics. In either case, being branded as a Category Traitor might cause Internalized Categorism. In cases where the accusation itself is an obvious strawman, this trope can be called Straw Traitor. A Cultural Rebel is especially prone to being branded as a Category Traitor. Can bring up accusations of being a Hypocrite (Straw or otherwise) on Alice's part, especially if Alice's category normally stresses the importance of things such as freedom and individuality (the obvious implication being that Alice hypocritically only pays lip service to these values). If Alice is prejudiced enough, she may label Bob a traitor even if she hates the things that non-traitorous members of the group supposedly do — because how can you justify hating someone if he doesn't have the good taste to conform to a hate-worthy stereotype?

Usually overlaps with With Us or Against Us, when Alice gives Bob an ultimatum regarding whatever activities he may be doing that Alice considers traitorous. May overlap with Entitled to Have You, if "loyal to the group" means "having sex with/marrying me", or The Quisling if they actively adhere to the category's oppressor in the process. Often includes the use of an Outside/Inside Slur. Compare Boomerang Bigot, Black Republican, The Whitest Black Guy, Gay Conservative, and My Species Doth Protest Too Much. Can sometimes lead to Defends Against Their Own Kind. Contrast Stop Being Stereotypical, when a character is criticized for the opposite behavior.

This is not an Audience Reaction entry: only examples where one character is in-universe accused of betraying his category are allowed. Whether or not the accusation is portrayed as justified is worth mentioning, but not relevant to whether or not it counts as an example.