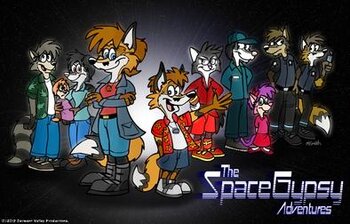 The Space Gypsy Adventures are a set of British sci-fi comedy radio stories created by Terry Askew. Notable in that the characters are all anthropomorphic animals. Mostly detailing the misadventures of the "space gypsy" fox Gemma Mildury and her younger brother, Damien, along with her on-and-off boyfriend, Duke; Duke's sister, Leah, Leah's husband Rekki (and their baby, Leandra), shuttle dealer and rocker Fluff Cat, and their frequent nemesis, Detective Inspector Spiker-and his unfortunate subordinate, Detective Constable Bones-of the Intergalactic Federal Alliance Police.

The original series ran on the UK National Hospital Radio Network over 1986-7 and was in syndication until 1997. The show was revived in 2004 and has been running since late 2011, the creators

have been reposting select stories online. They also have a band called Fluff Catt & The Rock Kittens

The accompanying artwork for the show was originally drawn by Terry Askew himself, but in more recent years the show's official artwork has been drawn by comic artist Mark Alexander Smith, author of the furry webcomic Transmission.