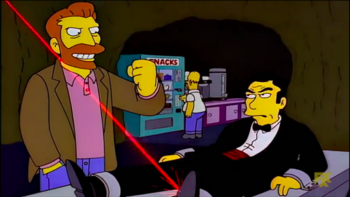 "There are, of course, obvious limitations to not understanding the role of money in the lives of the majority. The late president [John F. Kennedy] was aware of this limitation and he was forever asking his working friends how much they made. On occasion, he was at a disadvantage because he did not understand the trader's mentality. He missed the point with Khrushchev at Vienna... His father, an old hand at Hollywood, would have better understood the mogul's bluffing."
— Gore Vidal, "The Holy Family"
Advertisement:

Some characters are so completely insulated from the outside world that life, for them, is very different from life for others. This is extreme to the point that they literally have difficulty comprehending that life could be different for other people, and will work their everyday lives under the assumption that all people view life through the same lens that they do.

They can be given a rather rude awakening when, for one reason or another, a different character acts in such a way that the guy living in a bubble realizes that the world is a very, very different place from what he thought it was. Up until that point, they will always Fail A Spot Check if anything happens that conflicts with their world-view.

Often a good way to frame a Reasonable Authority Figure: The main reason they haven't acted so far is largely that they didn't realize what was going on.

In terms of logic, this thinking involves the common fallacy of Confirmation Bias, sometimes with a dash of No True Scotsman. Compare Opinion Myopia.

See also I Thought Everyone Could Do That. This is the supertrope to Rich in Dollars, Poor in Sense. A variation on No Social Skills. When the character is only blind in one area that's Selective Obliviousness.

Not to be confused with Inspector Oblivious. Or Captain Obvious.

SpongeBob scolds Gary for being mean to Puffy Fluffy, even though it's obvious the monster is trying to eat him.

SpongeBob scolds Gary for being mean to Puffy Fluffy, even though it's obvious the monster is trying to eat him.