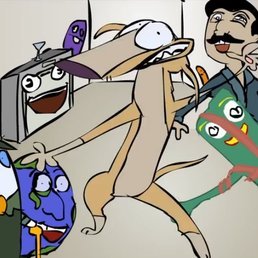 Alfred and his Playhouse friends!

"Get out of bed,
But don't wonder how the blood got there! (Good morning)
If Steve Martin violated you in your sleep again,
You will not care.
'Cause there's a place you can escape to mentally,
Where only silliness is making forced entry
For the purpose of self-preservation,
Here at Alfred's Playhouse!"
— Beginning Theme Song in "Alfred's Playhouse Part 1

Alfred's Playhouse is one of the most surreal and disturbing web video series on the internet. The series is about a traumatized, mentally ill dog named Alfred Alfer, who tries to forget about his abusive childhood by imagining himself in a happy fantasy world. In the videos, his alter-ego, Dictator Pickles, emerges, who is an Ax-Crazy psychopath who dreams of world domination. Alfred also shows himself to be incredibly needy and lonely, and he's often forced out of his fantasy land by harsh reality.

The series has been likened by some fans to David Firth's works such as Salad Fingers and Spoilsbury Toast Boy. The series is very Not Safe for Work, as it has full of sexual imagery, and has pretty disturbing themes, but it has a touch of Surreal Humor.

Alfred's Playhouse was created by Emily Youcis, who based the series largely on her own life experiences. A full-length movie of the series was produced in 2017. While her YouTube channel was removed due to her advocacy of neo-nazism, the videos can still be viewed on her Newgrounds account, found here

"And what do we do when we hear the secret word, boys and girls? ... We SCREEEEEEEEEEEEEAM." 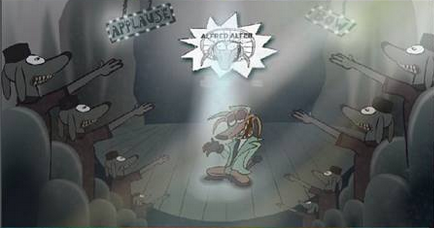 , she has begun producing the movie, all on her own, in segments released on her website which will be completed approximately 2017. It takes its audience into consideration, up to a point of Breaking the Fourth Wall.

The story takes place takes place sometime after Alfred breaks free of Pickles' hold on him when he has made a sole friend in Labby. After Labby abandons him in a surreal corn field, he is left alone to wander the literal Where the Dead go To Die and right back into Pickles' hands. Alfred descends into pure madness, creating new violent personas, while Pickles tortures him with shadows of his past and present.

The movie guest stars new music artists and voice actors, a number of which Emily considers friends, such as Lil Ugly Mane, JimmyScreamer Klaus, Passenger of Shit, JakProgresso, and Kenny Hotz from Kenny vs. Spenny.