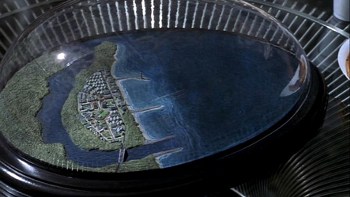 "Peaksville was just someplace. Someplace away from the world. It was wherever it had been since that day three years ago when Anthony had... done the thing. Had taken the village someplace. Or had destroyed the world and left only the village, nobody knew which."
— It's a Good Life by Jerome Bixby
Advertisement:

The character(s) live in a small secluded world. It could be a Pocket Dimension, Middle-of-Nowhere Street, an island without communication with The Outside World, a spaceship lost in the void, a special kind of prison, or something else that has the same effect. If there is any contact at all with an outside world, then this contact is very limited.

When there doesn't seem to be any world outside the Small Secluded World, then this trope overlaps with World Limited to the Plot. If there is an outside world, characters who grew up secluded from it are very likely to be naïve to it. They might mistakenly believe themselves to understand their world — be Ignorant of Their Own Ignorance. Alternatively, the characters are completely unaware that there exists an outside world at all: there's only the City in a Bottle.

In any case, living in such narrow boundaries is likely to affect the characters negatively. They might get depressed, desperate to get out, or even fail to comprehend that anything larger then their Small Secluded World exists.

May often have a Wall Around the World. Any Hidden Elf Village or Ominous Floating Castle is likely to qualify for this trope if the characters are forced to live there for a while. Also, any case of Ontological Mystery is likely to also be a case of Small Secluded World or World Limited to the Plot, or both.

Compare with Bottle Episode, where the characters are only locked in a secluded world, the bottle, for a single episode. Contrast with The Outside World.