Recap / Star Trek: The Next Generation S4E5 "Remember Me" 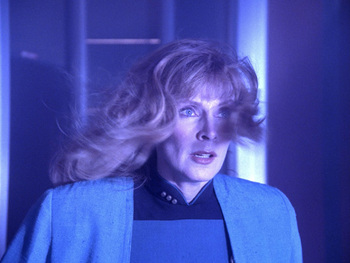 Dr. Crusher is excited that an old friend of hers, Dr. Quaice, is coming aboard the Enterprise. Sadly, his wife has recently died, and their catching up quickly becomes a bittersweet remembrance of the people they’ve each lost. Feeling sentimental, Beverly visits her son in Engineering and watches him as he performs an experiment on the warp coils. There’s an unexplained flash of light as he runs the test, but it doesn’t seem to be a significant problem. However, soon afterwards Beverly goes to visit Dr. Quaice again only to discover that he’s nowhere to be found.

No one remembers meeting Dr. Quaice, not even O’Brien, who personally beamed him onto the Enterprise. And inquiries at the Starbase where they picked him up reveal no records of Dr. Quaice whatsoever. Wesley comes up with a possible explanation, theorizing that Quaice was caught in the warp bubble he generated for his experiment. But he has no way of explaining how the bubble would trap Quaice when he wasn’t in Engineering at the time, or how it would erase all record of his existence. Beverly then finds that her entire medical staff has disappeared as well, and she’s astonished to hear Data casually tell her that she never had a staff to begin with. It seems the ship’s crew has been reduced from over 1,000 people to a mere 230, and no one but her thinks it should be otherwise. On top of all that, some kind of vortex suddenly appears in Sickbay, nearly pulling her in, but then vanishes.

As more people start disappearing, Beverly rushes to Engineering to see Wesley. He tells her he’s been trying to contact the Traveler in hopes that the mysterious alien can explain what’s happening. Beverly wonders if Wesley accidentally altered reality the way the Traveler could and decides to take this idea to Picard, but as soon as she rounds the corner she realizes that Wesley isn’t with her anymore.

She reaches the bridge to find that she and Picard are the only two left on the ship, and Picard insists that it has always been just the two of them, oblivious to how illogical that is. Before long, even Picard pops out of existence, leaving her alone. The vortex appears again, and she again narrowly avoids being pulled in, but this time the scene cuts to the other side, where Wesley and Geordi are desperately trying to pull her out of the warp bubble that she and she alone has been trapped in from the start. (Twist!) After they fail to pull her through, the Traveler appears, and tells them that there is still a way to save her. He explains that Beverly is trapped in an existence created by her thoughts at the moment she was caught in the warp bubble, and he says that with Wesley’s help he can open another portal to her reality—but only she can make the choice to go through it.

On her side, Beverly orders the ship to head to Tau Alpha C, the Traveler’s home world, only for the computer to tell her that no such planet exists. She tries to contact Starbase 133, but it’s no longer there either. She then learns that the entire universe has been reduced to a a spheroid region 705 meters in diameter. And it's still shrinking.

As the warp bubble collapses, Beverly puts together what’s been happening. When she was pulled into the bubble she had been worrying about losing the people around her, thus the alternate reality where people disappear. She races to Engineering, just in time to leap through Wesley’s portal before the Enterprise itself is erased. When she emerges, she asks Picard how many people are on board. He tells her 1,014, including Dr. Quaice. She notes with relief that that's exactly the number there should be.