Void Between the Worlds 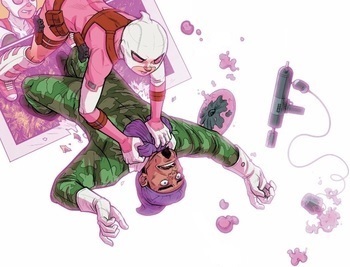 "There's all sorts of realities around us, different dimensions, billions of parallel universes all stacked up against each other. The Void is the space in between. Containing absolutely nothing. Can you imagine that, nothing? No light, no dark, no up, no down. No life. No time. Without end. My people called it the Void, the Eternals call it the Howling. But some people call it Hell."
— The Doctor, Doctor Who, "Army of Ghosts"
Advertisement:

The no-plane, non-existence and/or non-reality that surrounds and encloses all other planes, usually referred to as the Void. It's the space between Alternate Dimensions, the darkness between realms, the unreality between alternate realities; it's nothing itself.

Time may not pass in it, or it feels horribly slow. You can almost never leave, and if you can, you won't be the same. You might even suffer permanent psychological or physical trauma from the experience.

The void might be an entirely empty place/plane/reality/whatever, like a Blank White Void (or black) that's the size of the universe, or somewhere(?) that can't even be described as such, since it doesn't exist. A White Void Room is a room designed to look like this.

Anything native to such a place can be reasonably expected to be an Eldritch Abomination. Obviously a good source for anything using The Power of the Void. See also Hyperspace Is a Scary Place. Almost guaranteed to be where you are if you're festering in The Nothing After Death, in which cases it serves as a kind of Purgatory or Limbo. In its purest form however, this place is the primordial horror of Nothingness itself, and thus shouldn't even have demonic inhabitants - true and absolute nothingness is arguably scarier under this trope.

Might have some overlap with Portal Crossroad World or Hyperspace Is a Scary Place, depending on the setting. In its purest form it's just what it says on the tin: blank void between which different universes/worlds are set. In some variations, it can be sort of a half-empty but not entirely hub world (the Woods Between the Worlds in the Chronicles of Narnia). In some iterations, it's another plane of existence overlapping our own (hyperspace in Star Wars, sub-space in Star Trek, the hacker shortcuts in the Matrix that look like an endless hallway of white rooms, etc.). The page quote from Doctor Who gives the best straight-up example: pure nothingness between which all the parallel dimensions of Reality are set, not so much a "hub" as such (though you do need to traverse it to get from one to the other).

while reading this page to get the full effect.

Alternative Title(s): Made Of Nothing, Made Of Void