Literature / Lord of the Flies 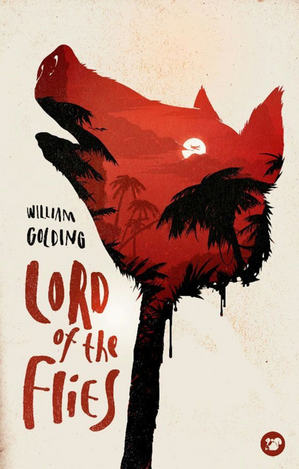 "We are going to have fun on this island."
— Repeated line
Advertisement:

Lord of the Flies is a 1954 novel written by William Golding. It is a Deconstruction of the Kids' Wilderness Epic and Robinsonade. A plane full of British schoolboys crashes on a Deserted Island, and the darkness of humanity spills forth as they turn against each other.

It's had three cinematic adaptations (a British one in 1963, an American one in 1990, and a little-known Filipino adaptation called Alkitrang Dugo in 1975 that had boys and girls, and an American adaptation was announced in 2019, to be directed by Luca Guadanigno) and is referenced and parodied in various media. It is very popular for English Literature assignments in High School on both sides of the Pond and Down Under, thanks to its themes about morality and authority, and its symbolism, which is extremely easy to spot, but open to many different interpretations.

The best-known example (and possibly the Trope Maker) of a Teenage Wasteland, even when all the kids are under the age of fifteen.

And whatever you do, we mustn't let the fire go out. Because... because... oh God, I can't remember.

Alternative Title(s): Lord Of The Flies