"Based on Truth and Lies." 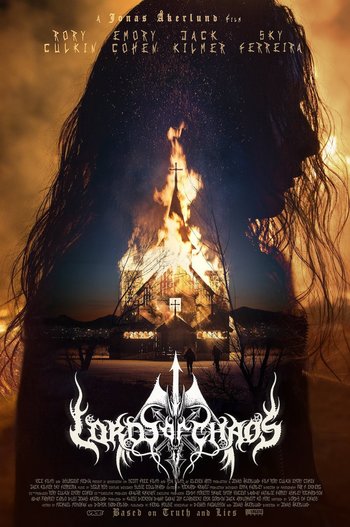 Lords of Chaos is a 2019 horror/Biopic film directed by original member of Bathory turned music video director Jonas Åkerlund, based on the infamous book of the same name, focusing on the second wave black metal scene of Norway, starting with the birth of Mayhem and the events that transpired from it.

In 1987 in the small city of Oslo, Norway, Øystein Aarseth aka Euronymous (Rory Culkin) decides to do the usual thing a teenage metalhead wants to do: Make the darkest and intense metal band out there. He founds the band Mayhem and they take things up a notch with their unstable vocalist Per Ohlin aka Dead (Jack Kilmer) but things go too far and chaotic when they meet paths with Varg Vikernes (Emory Cohen), a young man who wants to take things even further.

Trailer has been released

, and the movie was released February 8th, 2019 through selected theaters before dropping into on demand on February 22nd, 2019.