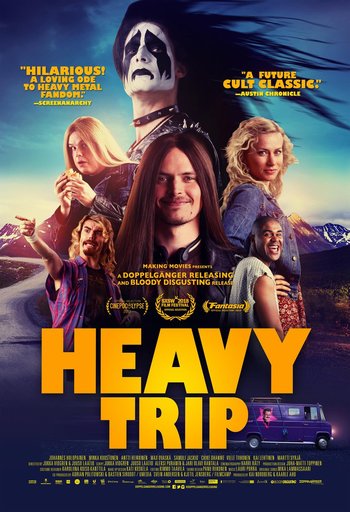 The most Finnish film ever.

Heavy Trip (Finnish: Hevi Reissu) is a comedy film written and directed by Juuso Laatio and Jukka Vidgren, about an amateur extreme metal band hoping to get a good start to their career by playing in Norway's Northern Damnation Festival. The movie is a hearty Lampshade Hanging of Metal tropes (a la Metalocalypse and This Is Spın̈al Tap), especially those applying to the Finnish and Scandinavian metal scene.

Heavy Trip was first released in Finland in 9 March 2018, followed by festival screenings in different parts of the globe starting from SXSW the very next day, garnering mixed to positive reception from audiences and critics alike and bagging quite a few awards over the course of the year.

Tropes applying to Impaled Rektum as a band: