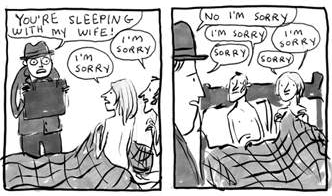 The moment of revelation often leaves an indelible scar. How did you discover the affair? [...] [W]ere you treated to a full-frontal view? Simon walked in on his wife and the contractor in his own bed. He hasn’t slept in it since.
— The State of Affairs
Advertisement:

Alice and Bob are having a tryst at Alice's house. Then they're interrupted when Alice's husband, Charles, returns home unexpectedly. Hilarity Ensues.

There are a few different ways things can play out. In the classic comedy version, Bob must hide from Charles inside the house, or that very room, until he can escape. Popular hiding spots include: under the bed, in the closet, and behind the curtains. The Closet Shuffle may be involved. Alternately, Bob may opt to flee immediately—often by jumping out a window while still undressed.

Some versions will imply the above, rather than outright showing it, by beginning the scene with Charles and Alice together in their bedroom—then Bob pops out of some hiding spot, surprising both Charles and the audience with Alice's infidelity.

Or, Charles may catch his wife and her lover completely off-guard, usually in the form of a Home-Early Surprise. This is what's most likely to happen if the scene is being Played for Drama. But there's plenty of comedy potential for this approach, as well. Charles could have some hilariously unexpected reaction to the discovery. Alice and Bob could make up a really implausible explanation for what they were doing, naked in bed together—and Charles might even fall for it. Tends to be used to invoke a Plot-Inciting Infidelity.

Subtrope of Interrupted Intimacy. Compare and contrast Bedmate Reveal, in which the couple is discovered after the act and thus can be used for the equivalent of a Sexy Discretion Shot, or a situation where it's Not What It Looks Like.

Trick's on him; he's been so indiscreet in other ways that the other man knows who he is and is plotting his revenge...

Sydney tells Michael that Kimberly is working late, so they have time to fool around. That's not entirely accurate.

Sydney tells Michael that Kimberly is working late, so they have time to fool around. That's not entirely accurate.