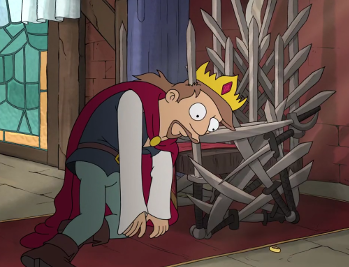 This is why you need to upholster your chairs.
That's gonna look real good on his gravestone in Arlington: "Here lies John Rambo — Winner of the Congressional Medal of Honor. Survivor of countless incursions behind enemy lines. Killed for vagrancy in Jerkwater, USA."
— Colonel Trautman, First Blood
Advertisement:

Death sucks. That's why most people are afraid of it. Some people die of old age or gradually succumb to one of a number of illnesses. When death comes, the lucky among us will go out peacefully with dignity. Some of us might go out fighting the good fight, saving the lives of some unfortunate person whom our consciences cannot ignore and force us to help. They'll all die "good deaths" (and in some cases, heroic deaths), and in Video Games, they'll be quite the spectacle.

This trope is about the people who die in ways that are, to put it completely bluntly, ridiculous and embarrassing. The manner of their demise are the things you read about on websites dedicated to the Darwin Awards. The kind of death that ends up the punchline of a joke told by a standup comedian who specializes in Black Comedy.

The humor in this is, of course, subjective — while we might find the way a person joined the Choir Invisible to be humorous and worth a laugh, to the person's family it is a tragedy. The bereaved naturally think you cruel and inhuman for laughing at such a tragedy. It is a tragedy... someone has died, after all. But that doesn't stop it from being funny when you think about it and, well, in some cases, even grieving friends and relatives might readily admit that it is Actually Pretty Funny. If it's played seriously, it's often a source of Narm.

Sometimes overlaps with Cruel and Unusual Death when the death is not just embarrassing, it's also horrific. Often overlaps with Death by Falling Over. Another likely category of undignified death are victims of The Can Kicked Him, both because a bathroom is usually safe and it takes bizarre circumstances to die there, and because you're likely to be unclothed and/or performing bodily functions. A supertrope to Lame Last Words, since in some cases the last words actually an undignified death make. Also the default consequence of being Too Dumb to Live, since there are few better ways to destroy your dignity than killing yourself through sheer idiocy. See also Dropped a Bridge on Him. Contrast Dying Moment of Awesome, Great Way to Go, and A Good Way to Die.

As a Death Trope, all Spoilers will be unmarked and unconcealed ahead. Beware.

Died Getting Laughed At

If your final moments has you getting laughed at by a near heart-of-stone alien because of dumb your name sounds, pray that your next life gives you a name that isn't nearly as stupid.

Fall on the stairs

Died Getting Laughed At

If your final moments has you getting laughed at by a near heart-of-stone alien because of dumb your name sounds, pray that your next life gives you a name that isn't nearly as stupid.

Fall on the stairs