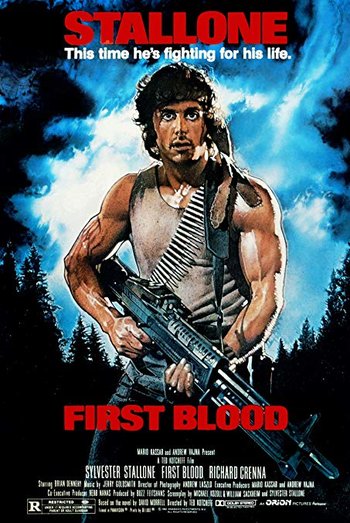 Sheriff Teasle: What would possess God in Heaven to make a man like Rambo?
Col. Trautman: God didn't make Rambo. I made him!
"You don't seem to want to accept the fact that you're dealing with an expert in guerrilla warfare, with a man who's the best! With guns, with knives, with his bare hands! A man who's been trained to ignore pain! To ignore weather! To live off the land! To eat things that would make a billy goat puke! In Vietnam, his job was to dispose of enemy personnel... to kill, period! Win by attrition... well, Rambo was THE BEST!"
— Colonel Samuel "Sam" Trautman
Advertisement:

First Blood is the first film in the Rambo franchise, released in 1982. It is based on the 1972 novel of the same name written by David Morrell.

The film deals with John Rambo (Sylvester Stallone) struggling to overcome the trauma he experienced during the Vietnam War. Having just learned his only remaining squadmate is dead, Rambo visits a small Washington State town for a bite to eat. However, the sheriff, Will Teasle (Brian Dennehy), doesn't appreciate "drifters" in his orderly town which he apparently treats as private property, so he drives Rambo out to the town limits to send him on his way. When Rambo turns and heads back, Teasle arrests him for "vagrancy" among other false charges after thinking he was trying to trespass into his town and orders him cleaned up for his trial. Police brutality ensues as the deputies rough him up while doing so, dredging all of Rambo's war trauma back to the surface.

Ultimately, a flashback to being tortured as a POW results in Rambo escaping from custody, becoming a fugitive from the law. Thus begins a small-scale war with the town police, which escalates to include not only the state police but the National Guard. This attracts the attention and assistance of Colonel Sam Trautman (Richard Crenna), Rambo's ex-commander, who knows what kind of killing machine he trained Rambo to be and hopes to capture him alive. The police would do well to heed his advice, because Trautman knows just how much damage Rambo is prepared to do if pushed too far...

Thanks to it being based on an anti-war novel from the early '70s and being produced and released during the tail end of the New Hollywood era, First Blood is notable for being completely different in tone, genre and feel from the rest of the franchise, being an anti-war psychological thriller that deals with the hefty subject of the dehumanization and mistreatment of Vietnam War veterans, complete with a famous speech on the subject. The One-Man Army Rambo is known as today would not surface until the Actionized Sequel Rambo: First Blood Part II put him back in the battlefield (and thus rather missing the point of this film).