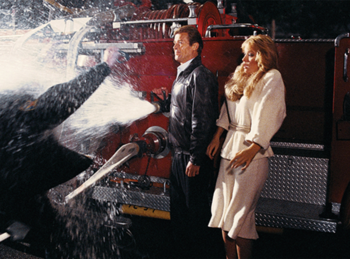 I'm going to wash that man right out of my hair...
Advertisement:

A water cannon is a device that shoots a high-velocity stream of water, which is frequently used for riot control. This weapon evolved from the use by authorities of fire hoses to quell riots in the late 19th and early 20th century.

Sometimes in fiction, a character (almost always The Hero) will still use a fire hose (or other high-pressure water source) as an Improvised Weapon. In most cases (especially if the wielder is The Hero) the target will be an individual or small group rather than a mob.

A Sister Trope to Water Hose Rodeo and to Deus Ax Machina, as many public and industrial buildings contain fire hoses (probably more than have fire axes).

Compare Making a Splash, where characters can do this without a hose.

Very much Truth in Television as any firefighter can testify to the concussive force of a stream from a high-pressure hose, and the difficulty of getting back to your feet if you are being bombarded by it.