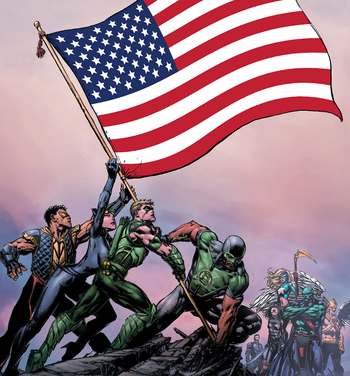 "There is something deeply reassuring about this photograph in its display of strength and teamwork—even the last man who no longer can touch the flagpole 'has the back' of his comrades—and its communication to push forward to victory."
— Ruth Ben-Ghiat,

◊ on Mount Suribachi during the Battle of Iwo Jima in World War II (also turned into a statue in Arlington Cemetery near Washington, D.C.).

It usually makes appearances in works with political overtones, usually relaying a message about military action or calling attention to one political cause or another.

More rarely, it may be invoked as a visual metaphor for someone/something actually laying claim to being Number One in or making great strides in their media field or genre.

Other times, it may not be symbolic at all but rather just a way for making something look cool and badass.

This is one of history's most famous and most recognized images and it's unlikely that it will stop being referenced any time soon. Examples may - in fact, probably will - include instances in which the image is referenced in ways that seem disrespectful, inappropriate, or distasteful.

See also Claiming Via Flag, which involves raising a flag to declare ownership.