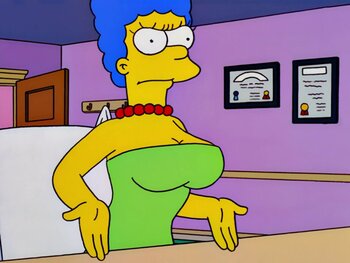 Marge's bosom should not be that ample.
Advertisement:

When Marge mistakenly thinks Homer is flexing for other women during a stint building houses for Habitat for Humanity (he was actually reenacting how Marge was in labor with Bart), she opts for a liposuction, but gets breast implants meant for one of Mayor Quimby's female interns by mistake. Meanwhile, Bart and Milhouse get Krusty the Clown in trouble when they imitate a stunt he did on an old episode of Batman (the campy 1960s show with Adam West as Batman) where Krusty played a villain and Krusty is forced to get rid of anything considered imitable by the censors.