Recap / The Simpsons S5 E17 "Bart Gets an Elephant" 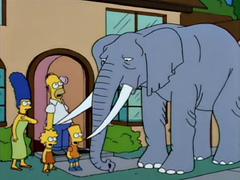 Bart wins a radio contest and picks the gag prize (a full-grown African elephant) instead of the cash prize ($10,000), which puts the family in financial turmoil once again.