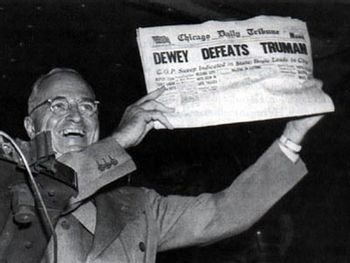 This guy's in a sort of competition — let's say he ran for school president. When they start to announce the winner, he automatically assumes that he won; he'll stand up, get this smug look on his face and he might even start giving his acceptance speech. But he didn't win... it was his rival, some random underdog, a write-in vote, or a tie, or a mix and match of those things.

The comparable Real Life example is the Award Snub. See also Thwarted Coup de Grâce for when one side has the other dead to rights and has the execution screwed up somehow, and Passed-Over Promotion when someone is denied a promotion they thought they were a shoe-in for. Compare Snub by Omission.

Alternative Title(s): And The Winner Is