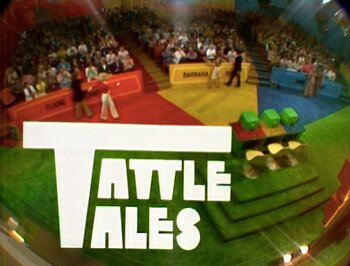 Game Show/Panel Game hybrid created by Ira Skutch and produced by Mark Goodson-Bill Todman Productions. A loose revival of He Said, She Said, it was hosted by Bert Convy and saw three celebrity couples trying to match answers. Only one half of each couple played the game onstage; the other half was placed offstage with headphones. Each episode of the show was directed by Paul Alter.

Originally, the show used a format wherein Convy would ask a question, and whichever spouse was onstage would ring in and relate a similar experience. If the offstage half could match the description given a one- or two-word clue, they would receive a cash award. These questions alternated with "Tattletales Quickies", or multiple-choice questions involving incidents in the couples' lives. In June 1974, the format was retooled to include only the "Quickie" clues. On all versions, the game was played in four rounds — two with the husbands onstage, and two with the wives onstage. Any money won by the celebrity couples was divided among Studio Audience members sitting in sections that corresponded to that couple — red, yellow (or "banana", as Convy called it), and blue.

The show ran from 1974 to 1978 on CBS (with a concurrent syndicated run in the 1977-78 season) and was brought back from 1982 to 1984, again with Convy as host. This version was replaced in June 1984 with Body Language, another Goodson creation and another revival (this one of 1975's Showoffs). A revival of Tattletales, under the new name About Last Night, is now in the works for HBO Max. It will be co-produced and hosted by NBA star Stephen Curry and his wife Ayesha.