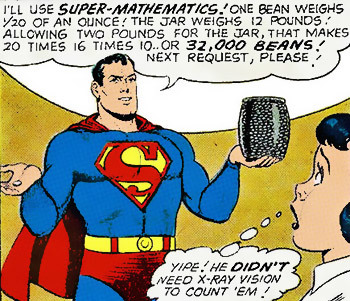 In "Super-Mathematics" it may be 32,000.
But in actual mathematics, it's 3,200.note (Assuming the rounding was even correct...)
"Up in the sky, the alien mother ship sent down twenty hundred troops, three in each space jet.
And if you want to know how many jets there were, you can do the math yourself. I'm a very busy writer trying to make a movie here."
— Calvin and Hobbes II: Lost at Sea (a Script Fic that imitates a movie)
Advertisement:

You're watching a show or movie, or reading a book, when suddenly something numerical — like a date or a sum or a character's age — jumps out at you as being "off". Your brow furrows. What on earth? You start adding things up on your fingers to check. That wasn't right!

You have just discovered the fundamental truth: that your favorite author failed irredeemably at high school mathematics and never wants to see a number ever again except in the corner of a page.

This is a particular kind of continuity error that would be avoided if professional writers kept calculators at their desks. It can also come from multiple writers not checking with each other, or screwups in the timeline.

Compare Soap Opera Rapid Aging Syndrome, Not Allowed to Grow Up, and Longest Pregnancy Ever, where the writers can do math — they're just intentionally fudging it. See also Sci-Fi Writers Have No Sense of Scale and Not Drawn to Scale. Possibly the root cause of Everybody Hates Mathematics. Might even involve E = MC Hammer. Artistic License – Statistics is a subtrope.

A natural habitat of the MST3K Mantra and Fan Wank, as in many cases these errors are not important to the plot (even when they are).