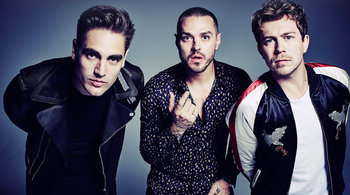 Left to Right: Charlie Simpson, Matt Willis, and James Bourne. Ms. Mackenzie was What they went to School For, they went to the Year 3000 (before the Jonas Brothers), and then they Crashed the Wedding. Now they wanna be On What You're On.
He said, "I've been to the year 3000,
Not much has changed but they lived underwater,
And your great, great, great granddaughter,
Is pretty fine, she's pretty fine."
"Year 3000"
Advertisement:

Busted are a British Pop Punk/Pop Rock Boy Band that formed in 2001, comprising of band members James Bourne, Charlie Simpson, and Matt Willis. They'd initially split up in 2005, due to Charlie wanting to focus on other music projects and the other two didn't want to continue the group without him. Simpson had quit the band and started the Post-Hardcore band Fightstar, as well as releasing a few solo albums, Bourne went on to form the Pop Punk band Son of Dork, which lasted three years before going on hiatus, and started a solo career under the name Future Boy (he really loves Back to the Future) and as himself, and Willis continued by himself solo.

Despite being mainly supplanted by McFly in the public consciousness, they were influential at the time in bringing back guitar-driven Pop bands and had a great many copy-cat acts at the time. They were also the number one selling band in the UK for two years, outselling Coldplay.

They were best known for their songs "What I Go To School For" and "Year 3000" (both were later covered by The Jonas Brothers for their first album, albeit with altered lyrics due to a demographic shift), for providing the theme song for the live-action Thunderbirds movie, and in America for their reality show America or Busted.

In 2013, Bourne and Willis reformed the band and teamed up with McFly to form a new supergroup called McBusted, toured from 2013 to 2015, and released one studio album named after the group. They were good friends withMcFly for years, as Tom Fetcher was briefly in Busted and wrote with them on many of their songs on their first few albums, so the team up made sense. Since this was only a temporary situation, the bands went their separate ways at the end of their 2015 tour, as well as a surprise for Busted, although they wouldn't mind reforming the group in the future or at least touring together again at some point.

In 2015 they reformed in their classic line-up, with a new album in preparation. This was accomplished after Bourne invited Simpson to come with him and Willis to Philadelphia to try to write songs in 2015. When this was successful, they subsequently started recording the songs in California and decided to reform the band, announcing a short reunion tour in late 2015, then they embarked on the Pigs Can Fly tour, referencing what Simpson had said years prior to the band reforming, released their third studio album as a band (in a different musical direction than what was probably expected), and toured around England, Scotland, and Ireland. They're currently writing and recording their fourth album in Los Angeles.

They've released 5 albums; 3 studio albums, 1 live album, and a US compilation album. They have a fourth studio album scheduled for release in 2019. They also released an album, sans Simpson, with McFly as the supergroup McBusted.