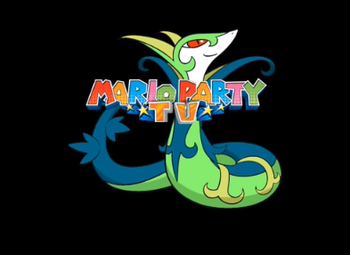 is a channel dedicated to group playthroughs of the Mario Party series. Extremely salty runthroughs, at that.

The core four players are:

Other frequently seen players are:

And lastly are the guys who rarely appear if at all:

In addition to taking map requests, the players have their own Let's Play projects of other games which are linked through to the main channel. They also did a project to LP Every Mario Party Board, playing one map on each of the main nine games and adding up all the stars and coins from each playthrough. At 203 stars, Mr. Doom has won the series.

Steeler has announced that they will do another 'Let's Play Every Mario Party' series soon (later dubbed 'Mario Party SuperSalt'), which will include some of the games that had been left out, including Super Mario Party and Mario Party 10. They started streaming the series on 27 August 2019 on Steeler's Twitch channel

, eventually moving to a channel specifically for MPTV

. Previous games can also be found on there, and they are being posted on Youtube on a delay.

Not all of the episodes are on the main channel; a playlist containing every video prior to the LP Every Mario Party series here

This Let's Play group has provided examples of:

That's it everyone, we shall see you at the next board/stream.