Visual Novel / Higurashi: When They Cry 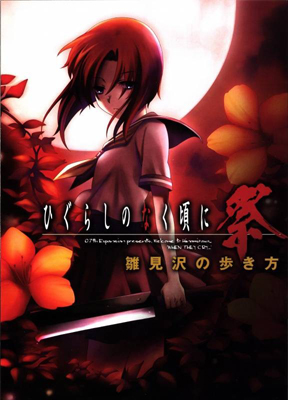 Welcome to Hinamizawa. note  Rena Ryuugu here would like to welcome you by taking you home with her.
"Whoever finds this note, please uncover the truth. That's all I ask."
Advertisement:

Higurashi: When They Cry (Japanese title: Higurashi no Naku Koro ni, which roughly translates to "When the Cicadas Cry") is a series of eight Kinetic Novels/sound novels by 07th Expansion, released between 2002 and 2006 and later adapted into both an anime and a manga series. It is the first series in the When They Cry franchise, followed by Umineko: When They Cry and Ciconia: When They Cry.

The year is 1983. When Keiichi Maebara and his family move to the sleepy little rural village of Hinamizawa, everything seems peaceful and rustic at first. But Keiichi quickly learns that there is more to the four girls of the school's game club than meets the eye... and more to the town as well. Revelation follows revelation, and brutal murder follows brutal murder in this enigmatic tale told from a variety of viewpoints and scenarios.

Higurashi consists of several different story arcs with most arcs beginning similarly but ending differently. If watched or read out of order, it can raise many questions about what is going on. The first four chapters, named the "Question Arcs" focus on the cycles of paranoia and death that plague the main characters. The fifth to eighth chapters, known as the "Answer Arcs" or "Kai", delve deeper into the causes of the repeating scenarios and their inevitable conclusions and the struggle to defy fate and the curse of "Oyashiro-sama".

While these eight games make up the main series, several bonus chapters are available, including "Rei" (a fandisc collection of three sidestories that take place after the main plot) and a fourth, anime-only installment, "Kira" (a series of light hearted fanservice laden OVAs that are outside of continuity). There are also several short, manga-only arcs, usually placed before or after the main story and introducing new characters, while retaining the typical atmosphere of the series. These arcs were adapted with some new ones for the Nintendo DS under the title Higurashi no Naku Koro ni Kizuna (2008).

The sound novels also had an Updated Re-release for PlayStation 2 named Matsuri (2007), with the original final arc (Matsuribayashi-hen) left out and replaced by an alternate ending (Miotsukushi-hen), as well as two additional arcs. The ports turn the games into bona-fide Visual Novels with choices and routes rather than independent successive arcs like the original version. Later ports to other consoles added even more extra material.

An anime adaptation by Studio DEEN aired in 2006, with a continuation, entitled When They Cry: Kai (or When the Cicadas Cry: Solution), airing in 2007 and covering the last two arcs. A sequel anime by Studio Passione titled Higurashi no Naku Koro ni Gou premiered in October 2020, and a second sequel, Higurashi no Naku Koro ni Sotsu premiered in July 2021; they partly serve as a thematic link between Higurashi and the second "When They Cry" series, Umineko.

A sequel manga, Higurashi: When they Cry Rei (shares name with a 2006 game and an OVA), was introduced shortly after the end of Gou/Sotsu. Taking place in the Reiwa era some thirty years after the events of the original series, the story now focuses on the children of our protagonists as Keiichi's son Keitarou returns to Hinamizawa after five years.

While the eight core games were translated by MangaGamer in 2009, the translation was largely considered rather poor. However, starting in 2015, the entire series (including the eight main games, the three Rei games, and the three Hou games) will be given a Western release, with updated sprites and a re-translation, from the same company under the title Higurashi When They Cry Hou. The eight main games have been released and can be purchased from Steam

or GOG.com. Short and spoilerific summaries of each arc are available on the When They Cry article.

In September 2020, a smartphone game with gacha elements and featuring a "sequel" story to the original visual novel, Higurashi no Naku Koro ni Mei was released to tie-in with the premiere of Gou.

A manga Higurashi no Naku Koro ni Meguri has been publishing from October 2021 and is a continuation/retelling of Gou/Sotsu.

Warning: Due to the nature of the plot, it may be best to experience the full story before proceeding.

Maebara-san, come into my car. The A/C is on and I have this list of tropes:

Due to the nature of Higurashi Gou and Sotsu, spoilers from previous Higurashi entries are unspoiled. 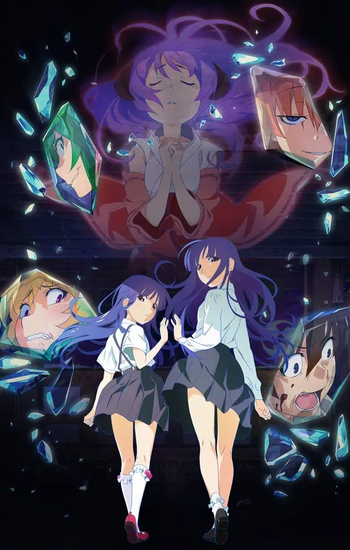 Welcome back to Hinamizawa.
Tropes in Sotsu 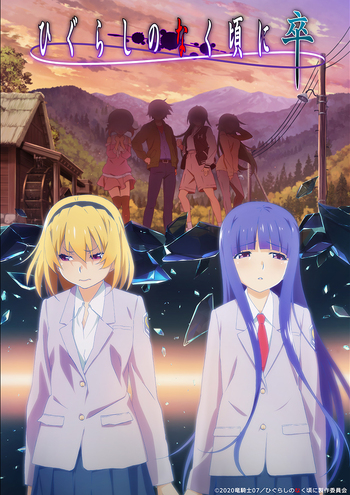 If you can get Rika to stay in Hinamizawa, my friend, I promise I will make life happier for you in that world.
Tropes in Rei
...And it'll be over with. Everything will be over and done with.

Yes, it will be over when the higurashi cry

Example of:
I'm Taking Her Home with Me!