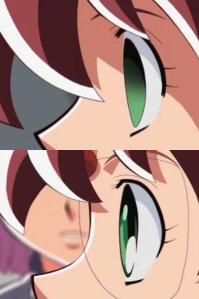 Are your eyes reflecting the light? Lower your eyelids until the light is concealed. Voila, you've got yourself Reflectionless Useless Eyes.

Although often overlapped with "Uh-Oh" Eyes, these eyes are not inherently sinister. The primary meaning is in relation to the lowered head or eyelids due to fainting or death, and by extension, the unseeing eyes of the blind. Or they are utilized in a way ours are not because they belong to someone who is notably different.

Subtropes include Empty Eyes (post-traumatic flat eyes) and Dull Eyes of Unhappiness (which can be cured by taking a level in cheerfulness). A frequent feature of Mind-Control Eyes.