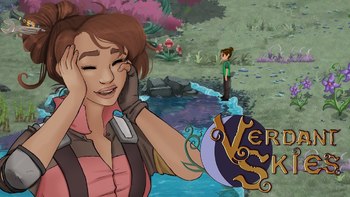 Time to get farming!
Advertisement:

Verdant Skies is a Farm Life Sim inspired by the Story of Seasons series. It's available for PC.

Taking place on an alien world named Viridis Primus, the goal of the game is to ensure the success of your colony. Along the way you can farm, fish, paint, make pottery, cook, befriend fellow colonists, and even fall in love if you wish.

Verdant Skies also differs from other games in its genre by not asking you to select a gender when you create your character.