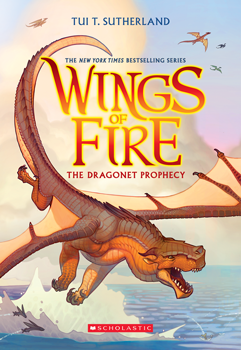 "Here there be dragons" might be an understatement.
"Five eggs to hatch on Brightest Night. Five Dragons born to end the fight. Darkness will rise to bring the light. The Dragonets are coming..."
—Last lines of The Dragonet Prophecy
Advertisement:

Wings of Fire is a series of dragon-centric children's fantasy books by Tui T. Sutherland, a member of the Erin Hunter team. The books take place on the Constructed World of Pyrrhia, a continent on a planet only known as "the dragon planet". Pyrrhia is inhabited by seven different tribes: the IceWings, SandWings, SkyWings, MudWings, RainWings, NightWings, and SeaWings.

Twenty years ago, Queen Oasis of the SandWings was killed by a group of humans who sought her treasure. Without a clear heir, her three daughters began to fight over the SandWing throne, which led to an all-out war that has torn Pyrrhia apart. Fourteen years later, the NightWings foresaw a prophecy that a group of dragons born on the brightest night (a rare time in Pyrrhia when all three of its moons are full), the Dragonets of Destiny, would choose a queen, stop the war, and bring peace. Now six years old and trapped under a cave for all their lives, the Dragonets of Destiny decide to escape, meet their families, and somehow save the world in the process. Each book is from the point of view of one of the five dragonets.

The second arc takes place after the first one. Pyrrhia has entered a time of peace, and the Dragonets of Destiny have opened up a school, the Jade Mountain Academy. Moonwatcher, a NightWing dragonet, enrolls in the school, but as strange things begin to happen around her, it's up to her and her new friends to find out what's going on and get to the bottom of it.

The third arc introduced a new continent, Pantala, and three new tribes: HiveWings, SilkWings, and LeafWings. Blue has lived a relative happiness as a second-class citizen in Cicida Hive with his stepsister Luna. However, when Luna begins displaying a strange and rare ability, Blue realizes that something very sinister is going on, and along with some unlikely allies, finds secrets that are far more dangerous than he could've ever imagined.

There is also a series of E-Books called Winglets, exploring the backstories of some of the side characters.

The series has also been adapted into graphic novels.

There is also a series of extra-length prequel books, Wings of Fire: Legends. Only two have been released as of yet - Darkstalker, released in 2016, is from the points of view of Darkstalker, Fathom, and Clearsight. The second one, Dragonslayer, was released in 2020, and is shown through the point of view of three scavengers named Ivy, Leaf, and Wren.

On March 5, 2020, it was confirmed that an animated television series adaptation was in development at Netflix, and will be made by Warner Bros. Animation and Ava DuVernay. However, on May 17, 2022

, Netflix suddenly announced its cancellation mid-development, alongside a bunch of animated projects.

Please add all new character tropes to the character sheet.

Alternative Title(s): The Dragonet Prophecy, The Wings Of Fire