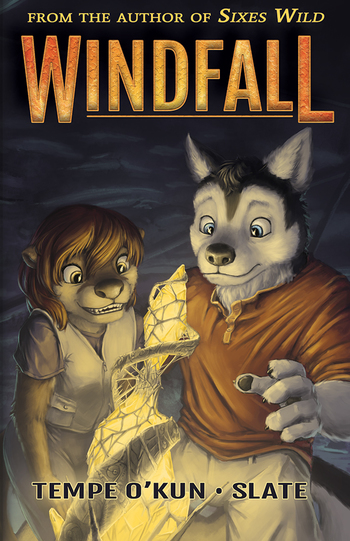 Kylie (left) and Max (right) find their proof. Art by Slate
Windfall is a 2015 furry novel by Tempe O'Kun.
Advertisement:

Teenage actors Max Saber and Kylie Bevy got along perfectly, both on their paranormal adventure show "Strangeville" and behind the scenes. But, after their show is canceled they go their separate ways, only then starting to wonder if they were more than friends.

When Kylie invites Max to visit her family's hometown of Windfall, the sleepy New England town that partially inspired their show, he jumps at the chance to meet with her again. Can they puzzle out their feelings for one another? Or the mysterious happenings going in Windfall?

If you were looking for the My Little Pony: Friendship Is Magic fanfic, see here.

Followed by a novella and short story collection titled An Otter-Body Experience.