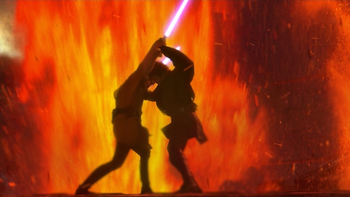 Which is hotter, that volcano or Anakin's fury?
Advertisement:

The climax is supposed to be the coolest part of the whole story. And since Lava Adds Awesome, it's a good bet that there is going to be a volcano involved. What better way to portray the tortured, desperate emotions of the characters than to juxtapose them with scenery that could have come straight out of a Fire and Brimstone Hell?

May be some overlap with Battle Amongst the Flames, Lethal Lava Land and Lava Adds Awesome. Related to Incendiary Exponent and Chekhov's Volcano. May ignore questions of Convection, Schmonvection.