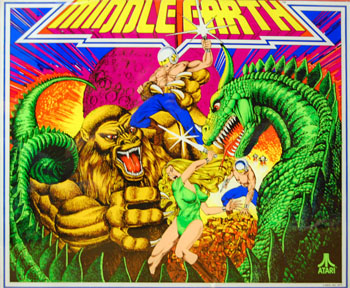 Frodo? Is that you?
"Escape to a new world of pinball adventure."
—Promotional flyer
Advertisement:

Middle Earth is a Physical Pinball Table designed by Gary Slater with art by George Opperman; it was released in 1978 by Atari.

Despite the title, the game has nothing to do with Tolkien's Legendarium. Instead, the name comes from the table's setting, an alien Lost World filled with feral beasts, bloodthirsty dinosaurs, giant apes, strange monsters, and the brave futuristic explorers trying to tame it all. But like Middle Earth itself, mastering this pinball won't be easy, as its double playfields and offset flippers require unconventional pinball skills.

On July 1st, 1978, songwriter Mandi Martin garnered national news coverage and entered the Guinness Book of World Records when she played Middle Earth for 140 hours and 32 minutes, with a final score of 321,400 points.note She broke the record again in 1979, and a third time in 2000.