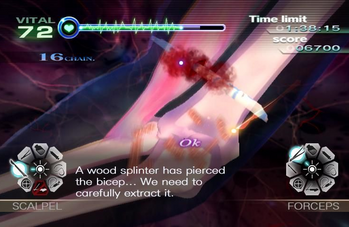 "Scalpel. Tweezers. Sponge. Wiimote."
There is a nasty cold and flu invasion going around and we need your help getting HALLS drops to all the poor sick customers.
— Cold and Flu Invasion
Advertisement:

They often involve role-playing as a doctor, nurse, or veterinarian and quite often you can take your time (occasionally overlapping with the trope Take Your Time if the illness or injury would require critical attention in real life), but sometimes they can be a Timed Mission where you have to treat the character(s)' problem/s quickly before they die. In games where many different characters are coming in, there might be a risk of either one of them dying while you're busy tending to the others, or running out of room (e.g. you have six beds, but then in comes a seventh patient). Characters' deaths may result in Game Over, or, if there are multiple characters, may simply detract from your score.

Usually, the aim of the game is just "treat this character's illness/injury" or "treat both/all of these characters' illnesses/injuries", but other times it's "give medical treatment to as many characters as you can before the time runs out", "treat their illness without getting sick yourself", or "give medical treatment to X number of characters before the time runs out". More realistic games of the genre tend to be Simulation Games as well, usually those revolving around surgery.

May overlap with Sick Episode, Find the Cure!, The Dentist Episode, Magic Antidote, The Plague, or Injured Limb Episode. Contrast Ultra Super Death Gore Fest Chainsawer 3000 for games about hurting people. Compare Disaster Relief Game and Contamination Situation, where treating the patient might not be the only goal of the game. Do not confuse this with Playing Doctor.