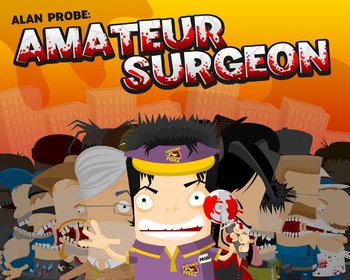 Amateur Surgeon is a series of medical based action puzzle games developed by MediaTonic and published by AdultSwim for Flash and mobile ports (or to put it simply, Trauma Center with idiots). The series is mainly centered around former pizza deliverer Alan Probe and his life after entering his dream job world of surgery, with latter installments introducing his disciples and successors. The games provide plenty of examples of Black Comedy and gross-out humor with an unique difficulty curve, easily seen with Alan's arsenal of improvised medical tools. The most iconic is a pizza cutter, which he and other playable characters in the games use as a scalpel.
Advertisement:

), was released in May 4, 2008, and involves Alan starting his surgeon career after treating his later mentor Dr. Ignacious Bleed, whom he accidentally ran over in a pizza delivery van, with household objects as surgery tools. With Bleed's help, he treats a number of other people (mostly criminals) on the streets, many of whom were injured in rather unusual traumatic events.

The game led to a number of follow-ups in the series:

The series has only focused on Amateur Surgeon 4: Regenerations since 2016. Said game has been constantly updated with the addition of several side storylines to play alongside the main one and the hosting of in-game events (including a crossover event with Rick and Morty).