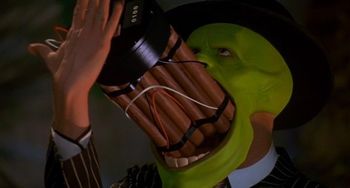 A character eats a bomb (or anything explosive), unknowingly or not, and the resulting explosion will either cause death, slight indigestion, burping a fireball, or nothing at all. May be intended as Bomb Disposal or containing the kaboom.

For a more weaponized version (such as Video Game Boss Battles), see Feed It a Bomb.

Eating the Enemy has the same idea, except it's done to a sentient being. Subtrope of Artistic License – Explosives, as Jumping on a Grenade is generally a much more efficient way to make an Heroic Sacrifice. Subtrope of Contain the Kaboom.