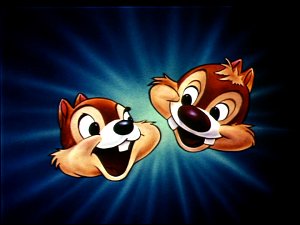 Their initial turn in the spotlight came in the late '40s as the antagonists in a handful of Donald Duck cartoons, acting as little more than a reason to demonstrate his famous Berserk Button (you probably remember that one cartoon where Donald was an apple farmer) before tormenting other classic Disney characters like Pluto and Mickey Mouse. However, it would be in the late '80s, during Disney's "renaissance" period, that the two would reach the height of their popularity with Chip 'n Dale: Rescue Rangers, a series which recast them as amateur crimefighters. Since then, they've appeared in their original forms with other Disney regulars in revivals such as House of Mouse.

Their name is probably a pun on the famous 18th-century furniture style, and not a reference to the Chippendales Dancers, whom they predate by many, many years.

A second animated series starring the titular duo called Chip 'n' Dale: Park Life was released to Disney+ on July 28, 2021 and produced by Xilam Animation (of Oggy and the Cockroaches fame) where the titular characters speak gibberish as a throwback to the older shorts. The series also brings back Clarice from the "Two Chips And A Miss" animated short after being absent in animation for 69 years.

Both characters starred in a live-action/CGI hybrid based on ''Chip 'n' Dale: Rescue Rangers', which released on Disney+ on May 20, 2022. As the premise is that the duo are Animated Actors, they are voiced here by John Mulaney and Andy Samberg, although MacNeille and Burton briefly reprise their roles as their chipmunk voices.

Not to be confused with Warner Bros.' comically ultrapolite Goofy Gophers, Mac and Tosh.

Shorts with their own page: