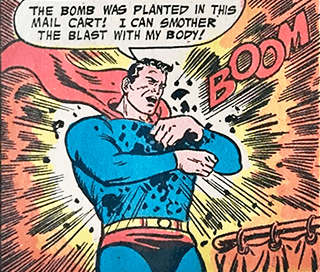 There are many ways a character can display strength or power. Some have Super Strength and can lift massive structures for the crowds. Some have Super Speed and can move faster than the eye can see. Some are practically invulnerable and can take whatever you throw at them.
Advertisement:

But if you really want a character to show how impregnable they are, how about having them compress a bomb explosion with their bare hands or shrink a blast with a thought?

That's when this trope comes into play. The trope details a situation where a character shows how obscenely powerful they are by containing an explosive force through sheer physical might or force of will.

While a person doing this is highly implausible if the explosive is larger than a grenade, the basic premise is Truth in Television — the two easiest ways to neutralize a bomb are to either move it someplace where there is nothing to damage when it does go off, or surround it with material capable of containing the blast to minimize the damage when it explodes in place.

A Sub-Trope of Bomb Disposal and Super-Trope of Eat the Bomb and Jumping on a Grenade (where there's no expectation of survival).