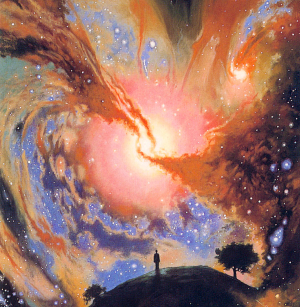 A room with a view. Of everything.
"There is a place in the galaxy where the Dark Side of the Force runs strong. It is something of the Sith, but it was fueled by war. It corrupts all that walks on its surface, drowns them in the power of the Dark Side — it corrupts all life. And it feeds on death. Revan knew the power of such places ... and the power in making them. They can be used to break the will of others ... of Jedi, promising them power, and turning them to the Dark Side."
— Kreia, Knights of the Old Republic II: The Sith Lords
Advertisement:

Places around the world where magic is said to naturally gather in large amounts. These areas are often geologically significant, such as the top of a hill, or the intersection between two or more rivers. Natural rock formations are also common sites, as are many others. Some are given significance by events that occurred at that location. Battlefields, for example, are often said, in fiction and real life, to contain "vibes" left by those who fought and died there. Another common place are so-called Ley Nodes, which occur where two or more Ley Lines intersect. Or you may just find one At the Crossroads.

These places may be used by priests and mages for various rituals, such as worship, sacrifices, summoning, or all of the above. For some, spells with a high requirement may be possible to cast there, with the ambient magic of the area making up for the mage's own deficiencies. Some can gather even more power during certain times of the day (sunrise/set, noon, and midnight), year (solstices and equinoxes, for example), or other times (such as solar and lunar eclipses, planetary alignments, and the like).

A Magnetic Plot Device is sometimes explained this way. Often acts as a Field Power Effect. Compare and contrast the more malevolent Eldritch Location. Contrast Your Magic's No Good Here, i.e. Place of No Power.

Don not confuse with Peninsula of Power Leveling, a location where stronger-than-usual enemies can be fought for faster Level Grinding.

If it exists in Real Life, it's a Landmark of Lore. Such places fall under studies such as Psychogeography, arts like Feng Shui, and other teachings. Much of it, of course, is dismissed as pseudoscience, but in fiction, if the idea is mentioned at all, it is far more likely to be true.