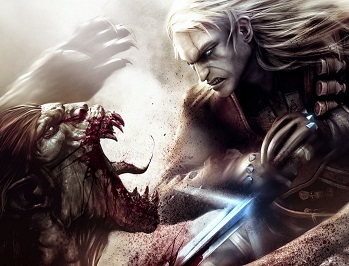 "Death, the final judgement. The Beast has met its end once. It doesn't fear death, it is death. How will you defeat human villainy? With your sword? You who died and still walk amongst the living?"
— Eredin Bréacc Glas
Advertisement:

The Witcher is a computer Role-Playing Game in which you play Geralt of Rivia, a monster hunter questing to regain his memories whilst pursuing revenge against a mysterious group known as the Salamandra. It was based on an upgraded version of the Neverwinter Nights Aurora engine, developed by CD Projekt RED and released in late 2007.

The title is set in The 'Verse introduced by Andrzej Sapkowski's novel of the same name. It sold unexpectedly well both in the US and worldwide, given that it was a niche PC game based on a book mostly unknown outside of Central Europe. A sequel, The Witcher 2: Assassins of Kings, was released on May 17, 2011. A third game, The Witcher 3: Wild Hunt was released on May 19, 2015.

Interestingly, the first Witcher game has a rather extensive post-release history. A remake of the first game titled The Witcher: Rise Of The White Wolf was to be released for the Xbox 360 and Playstation 3 in 2009, featuring a brand new engine and more action-oriented combat system in the vein of the then-upcoming sequel. Unfortunately, it was cancelled in 2009 due to disagreements between CD Projekt Red and co-developer Widescreen Games. However, in 2012, a group of modders endorsed by CD Projekt Red began work on an ambitious mod for the Enhanced Edition, also titled "Rise Of The White Wolf," that introduced new story elements, a seriously overhauled interface, an improved combat system, and updated graphics. The mod was released in 2014 to great acclaim and is now seen by many as the definitive way to play the original.

Note: The tropes listed on both this and the YMMV page are for the vanilla Enhanced Edition. The updates/changes made in the "Rise Of The White Wolf" overhaul are not included at the moment.

The Game Provides Examples Of:

"And so ends this tale. And Geralt would go on to have many more adventures. But that's another story."