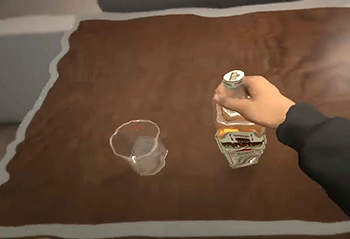 Many video games feature alcoholic beverages or other mind-altering substances as items which the Player Character can consume, resulting in Status Effects. In arcade-style video games, this usually comes in the form of a Booze-Based Buff: drinking alcohol causes a character to deal more damage or become impervious to pain.
Advertisement:

Some developers, with an eye towards Unexpectedly Realistic Gameplay or Painting the Medium, take a different approach, wherein using drugs or alcohol in-game causes an Interface Screw which mimics the effects of intoxication. This can look like:

This trope is not limited to alcohol or drugs taken voluntarily, and can also apply if (for instance) the player character gets shot with a poison dart, or forcibly injected with a mind-altering substance. This trope is also not limited to video games: many tabletop games feature a mechanic in which a player character being intoxicated will temporarily reduce their player's dice pool, or otherwise hinder their progress.

Note that this is an Intoxication Mechanic: it doesn't count if it's a scripted sequence or Exposition Break which the player has no control over. For that, see Impairment Shot.

Compare Alcohol-Induced Idiocy, Injured Player Character Stage (when the player character gets injured as part of the story, resulting in a change to the game mechanics) and Sanity Meter (some video games track the player character's sanity, and cause Interface Screws such as blurred vision or hallucinations if it gets too low).

Note: Examples have been alphabetized.