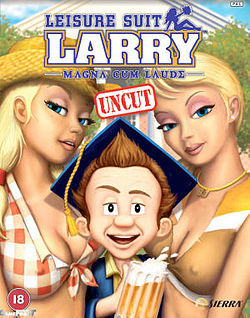 Like many other current games, Magna Cum Laude has a free exploration mode where Larry can walk about campus and interact with students and personnel on the premises. In this mode, Larry can search for hidden money or tokens, strike poses to impress girls, and take photos which can later be sold to collectors. At several locations on campus a minigame can be entered, usually by "activating" an object or a person (starting a conversation). The player must win most of the minigames in order to advance. Minigames started by a conversation usually increase the affection of one of the girls; other minigames can provide money or increase "confidence".

The main character, Larry Lovage, is a student at Walnut Log Community College whose purpose is to get on a dating TV show called "Swingles". Uma Yasmine, the hostess of the show won't allow Larry in the show until he proves his seductive wits by obtaining "tokens of affection". Sixteen college girls will conveniently be at his disposal. His aging uncle Larry provides brief advice and appears at a local bar. Larry also must outsmart a sorority house and a fraternity house known as Delta Iota Omicron.